Chapter 1: In the Beginning

The year was 2003 when the insanity began for the Metal StudZ.  Some say there was a lightning storm that caused major power outages throughout the area and after a damaging bolt hit the gutters of West County St Louis....the StudZ emerged.  Obviously, those who think that are delusional and should probbably seek medical assistance immediately.

What actually happened was that drummer, Thorn Gabriel had an idea.  Tired of the music of the day (which in retrospect doesn't seem all that bad now), Thorn wanted to revisit the decade that brought the most musical joy to him and countless others.  The 80's.

After a failed "Duran Duran" tribute attempt, 80's hair-metal was the next big idea.  Enter Drake Darrington.  Drake was also looking for something different and although interested in the prospect of an 80's hairband tribute, was initially reluctant about the idea.  He was more interested in starting a tribute to "The Outfield".  When an enthusiastic drunk Thorn informed him they really had just the one hit, Drake agreed and they began putting together a lineup to see if it could actually make the hairband idea work.

After creating a set list, the boyZ recruited the other 2 members that would complete the Metal StudZ lineup.  Stevie Trixx, (brother of Thorn) was brought in on Guitar and Dr. John on Bass.   Rehearsals began and months later, three one hour sets were ready to go.  It was at those rehearsals that the name of the band was born along with an over the top 80's style stage show.

Everything the StudZ would do for the following years would be based on ideas that were formulated during this time period. 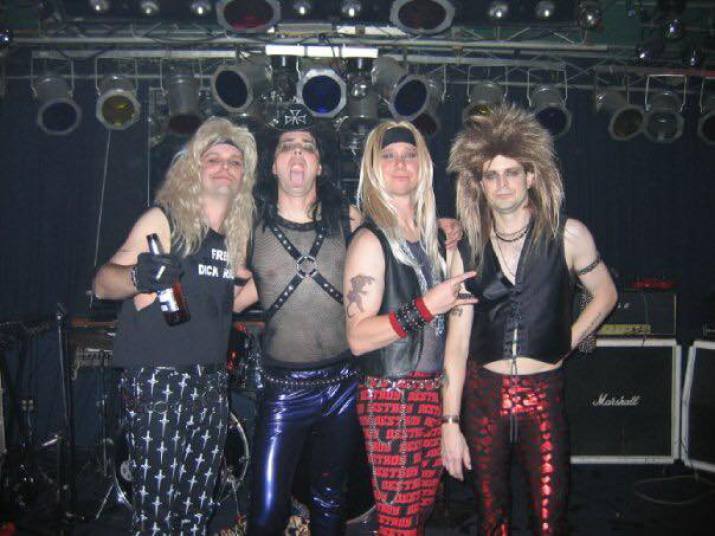 After many months of rehearsals and creating the Metal StudZ image, the boyZ decided it was time to get out of the basement and start playing in front of a crowd.   At that time, there weren't many tribute bands around St Louis and there wasn't much of a demand either.  Drake came up with the idea of playing at the Moolah Shrine Center.  Through his own personal contacts, Drake was able to secure the gym of this former Junior High School for the StudZ debut show.   This was a very large room with a very large stage, so many months of planning began.  Through no real advertisement and relying on friends or family only, not only did people show up but there was a large turn-out for the gig.  This literally set the stage for the future of the StudZ shows and set the bar high.  It also provided an oppurtunity to create a video to give to clubs/bars around the city so they could see what the Metal StudZ were all about. 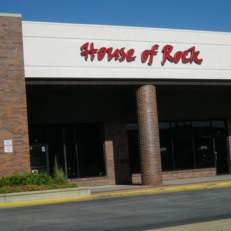 After the big premier, the StudZ now had a promotional video along with some band photos, which gave them ability to start shopping themselves around town to the bars that booked live music.  With no name recognition this proved to be a challenge to sell the owners/managers on taking a chance on a bunch of unknowns in spandex.

The first to give them a chance was a dude named Paul Farwig, who booked bands at "House of Rock".  Just about every bigger cover band in the area played there and this was a big chance to get in to somewhere where people actually showed up to see good live music.

Once again, the boyZ had to rally the troops of friends and family to come out to HOR and show some support.  And just as they had for the Moolah show, they all came and this time they even brought friends with them.  The House of Rock had a packed house on a Tuesday night for the debut of Metal StudZ.  Paul Farwig and the owners were blown away.  They made lots of money on a weekday and that sealed the deal for a spot in a monthly rotation at House of Rock.  But from then on, it was on a Saturday night.

Soon after that, another bar had approached the StudZ about playing in their new bar.  There was a waitress who worked at HOR who also worked at this new establishment named, Rock Island.  She told the owner about the StudZ and he wanted to boyZ to come to Rock Island, also on a monthly rotation.  This was a larger venue than HOR, which is exactly what the StudZ were looking for.

After some time the StudZ had been playing in rotation at both the HOR and Rock Island .   Rock Island were so happy about it that they painted the Metal StudZ logo on the wall (along with a few other "house bands").  They also released a DVD with a showcase of all of their favorite bands, and the StudZ were included.  Below is one of the songs from that DVD.  *Warning -Poor audio quailty

The word was starting to get out about this "crazy band in spandex who play all the cool 80's shit".  The people came.  And they came back again and brought friends, etc, etc.  The crowds got larger and the band soon had a reputation of being able to consistently draw.  This was the beginning of what would soon be a successful thirteen year run.  Keep Reading